This year's competition will be held on April 10 - 12, 2022 at the Delegation of the European Union to the U.S. in Washington, D.C. The topic question for this year's Challenge has now been selected: How should the EU and U.S. cooperate in Afghanistan following the U.S. military withdrawal?

The Schuman Challenge is an annual foreign affairs contest for undergraduate students in the United States to present and defend transatlantic policy initiatives before transatlantic experts. Organized by the Delegation of the European Union to the United States, teams of three undergraduates led by a faculty mentor compete on a different theme each year. Senior EU and US diplomats, famous reporters and think tank leaders judge the competition. Last year, more than 20 teams from 11 U.S. states and DC participated.

The 2020 competition focused on EU and U.S. responses to China’s alternative models of governance. The stellar panel of judges includes Stavros Lambrinidis, Ambassador of the European Union to the United States, Karen Donfried, President of the German Marshall Fund of the United States, and Jim Sciutto, Chief National Security Correspondent at CNN.

The Weiser Diplomacy Center (WDC) nominated a group of Ford School undergraduate students to participate in the Schuman Challenge, an annual foreign affairs competition organized by the European Union Delegation to the United States in Washington, D.C.  For more information about competition themes, please visit the E.U. Delegation's website.

During Winter term, WDC issues a Request for Applications—including specific application requirements and deadlines—via Compass to the Ford School community.

If you have any questions regarding this opportunity, please contact Zuzana Wiseley, program coordinator (zwiseley@umich.edu). 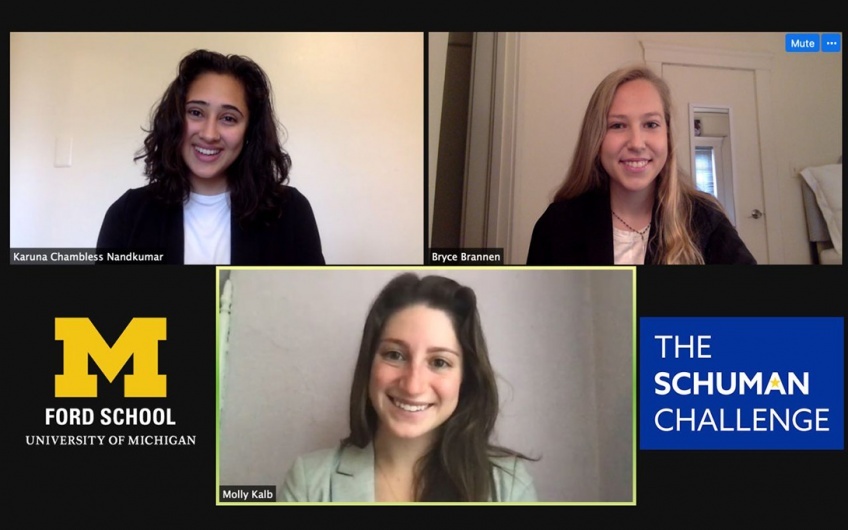 
Watch final round of competition